If you’re like most people, your inbox is constantly overflowing with unread email. In all of that chaos, it’s way too easy for important messages to get buried. Here are five apps that will help you manage email overload, whether it’s mass-deleting, mass-unsubscribing or snoozing emails, or even sending canned responses to common inquiries.

Mailstrom pulls in your email into a web interface that helps you organize and mass-delete your emails. You can view messages by sender, subject, time, and size. All of the related emails in a specific category are consolidated to allow you to delete or file a group of emails with just one click. It also allows you to “chill” an email, which means that an email will temporarily disappear from your inbox until it’s actually relevant – just like hitting the snooze button on your alarm clock. The goal is to get to “Inbox Zero” faster for a calmer day at work.

Sanebox is an application that integrates with your mail program and learns how to prioritize your emails based on past behaviour. It creates a new folder called SaneLater where messages from your inbox that the app deems are low priority are placed. At the end of the day, you receive a daily digest of all of the emails that were placed in this folder so that you don’t miss anything that could have potentially been important. If you move an email to your SaneLater folder, the app begins to learn the types of emails that are less important, and will do this automatically in the future. Like Mailstrom, you can also defer emails for a later time with Sanebox.

Whether it’s a promotion for that conference you went to last year, or hotel and travel discounts, it’s easy for our work emails to get cluttered with unneeded communications. With Unroll.me, it’s easy to unsubscribe from those lists to keep your inbox clutter-free, or consolidate them into a daily or weekly digest email called a Rollup. The app currently works with Gmail, Outlook, Yahoo, AOL, and iCloud.

Clear Context, an add-on for Microsoft Outlook, is an email management system that does more than just organize your emails; it helps organize your workday. It looks at which emails you’re replying to most often and prioritizes the messages in your inbox based on this. It also turns your emails into tasks so you won’t overlook anything. For example, you can easily turn an email into a task or appointment with a single click.

Canned Responses is a Gmail feature that you may not be aware already exists in your inbox. It allows you to send pre-written and standardized emails to people. For example, if you get a lot of customer inquiries about particular services or products, having a canned response can be a very efficient way to build a response. It’s also a great idea if you want to acknowledge receipt of an email but you don’t have time for more in-depth comments. You’ll find it in your Settings under Labs. You have to enable it from the list of labs available to you. To use the feature, simply select the little triangle on the lower right corner of an email you are composing. 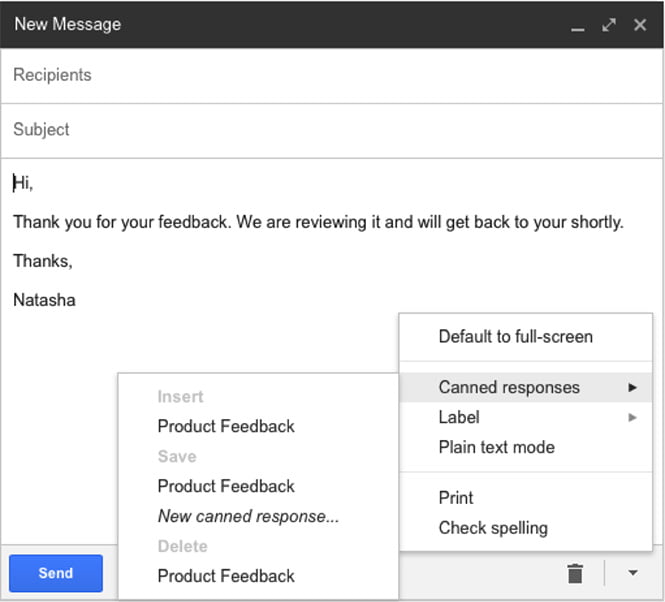 About the author: Natasha is one of the founders of Snap EDA, helping electronics designers build better products faster. She is an experienced technologist and writes about how founders can make their work more effective through the use of technology.