Finding Your Brand Voice on Social Media and
Keeping It Consistent

Every business has to be able to explain who they are. Not what they do or what their products offer, but the traits that define their identity.

No big deal, right? (It’s not like “Who am I” is a deeply personal and philosophically complex question or anything.)

Tricky as it can be, though, confronting that question head-on is monumentally important – especially when it comes to your social media.

Your company’s voice on social media shows people who you are – and just as importantly, who you aren’t – and you have to be able to keep that identity consistent.

How do you use social media to develop and maintain a brand personality, though? How does that personality manifest in what you share, and how do you maintain consistency over time – especially when delegating social media tasks to another person, or multiple people?

Let’s take a closer look at how a few large brands differentiate themselves from each other on social media using voice and identity, and how, as a founder, you can follow their lead to do the same.

T-Mobile and Verizon are two companies that could potentially seem very much the same on social media, but make themselves distinct using style, voice, and tone.

T-Mobile, for example, embraces Internet youth culture in a way that Verizon doesn’t. By creating memes, adopting an informal vernacular, and sharing content like unboxing videos, T-Mobile brands itself as a company that understands a very specific audience, and one that audiences can identify with and trust.

Verizon, on the other hand, is more formal, sharing content more focused on technology and social issues. The difference between the two companies isn’t one of quality, necessarily, but of priorities, interests, and personality – consumers become loyal to one or the other not just because of that brand’s quality, but because of the ways in which they relate to that brand’s identity.

The difference in voice between Wendy’s and McDonald’s is another example of how two companies that offer similar products can make themselves distinct using solely their social media voice.

McDonald’s and Wendy’s tweet about many of the same topical subjects, like March Madness, but Wendy’s has also developed a reputation on social media for its snarky attitude – particularly regarding its competitors. Their Twitter account frequently takes explicit shots at the quality of brands like McDonald’s:

McDonald’s doesn’t share that attitude, nor does it create content directed at other brands like Wendy’s does. The snarky humor of the Wendy’s Twitter account is popular with that account’s fans, but it isn’t necessarily for everyone. The decision to not adopt a similar persona establishes McDonald’s as a brand with distinctly different values.

Netflix and Hulu are a final example of two similar businesses that use Twitter to differentiate themselves based on identity, rather than services.

Netflix, like T-Mobile, creates memes based on the shows and movies available on its service, particularly its own original programming. Their Twitter account also shares and provides humorous commentary on news, articles, and social media posts from other sources that are related to their own programs. Their identity is that of an active social media user who’s highly engaged in trends, and exhibits a relatable level of self-awareness.

Hulu’s personality is significantly more to-the-point – their content focuses almost exclusively on straightforward promotions for the shows and movies they offer. That focus isn’t necessarily unique to Hulu, but focusing on it to the extent that they do reinforces their brand as one that appeals to people who take TV and entertainment seriously. Hulu still shares content that engages their fans, but not with the same sense of humor (or even self-mocking) of Netflix.

How do you find your voice on social media?

A brand’s social media voice doesn’t manifest by accident – it’s the result of careful planning and deliberate decisions. Like any other form of marketing, your social media voice should cater to the specific audience you want to appeal to the most.

If you want to sharpen your voice for an existing audience on social media, your Facebook Insights and Twitter analytics can help you hone in on who’s reading your content. Both of these offer you demographic data breaking down your audience by age, location, gender identity, and more.

Whether or not you start by examining your existing audience, though – and regardless of whether or not you even have one – consider your ideal audience, and what type of voice may or may not appeal to them. Be as specific as possible, too! In all three of the examples above, two brands are technically competing for the same audience: cell phone users, fast food consumers, entertainment streamers. In each case, though, the two brands both differentiate themselves by focusing on an even more specific subset of that shared audience – each one goes after a different slice from the same pie.

As we prepared to launch MeetEdgar in 2014, for example, we decided that our brand’s voice on social media would be casual, funny, and even a little unpredictably odd. These were all qualities we felt weren’t shared by other brands in our industry, as well as ones that we predicted would appeal to a specific type of independent entrepreneur. From our promotional posts to our one-on-one interactions, that voice has always helped us stand out from other brands in our industry. 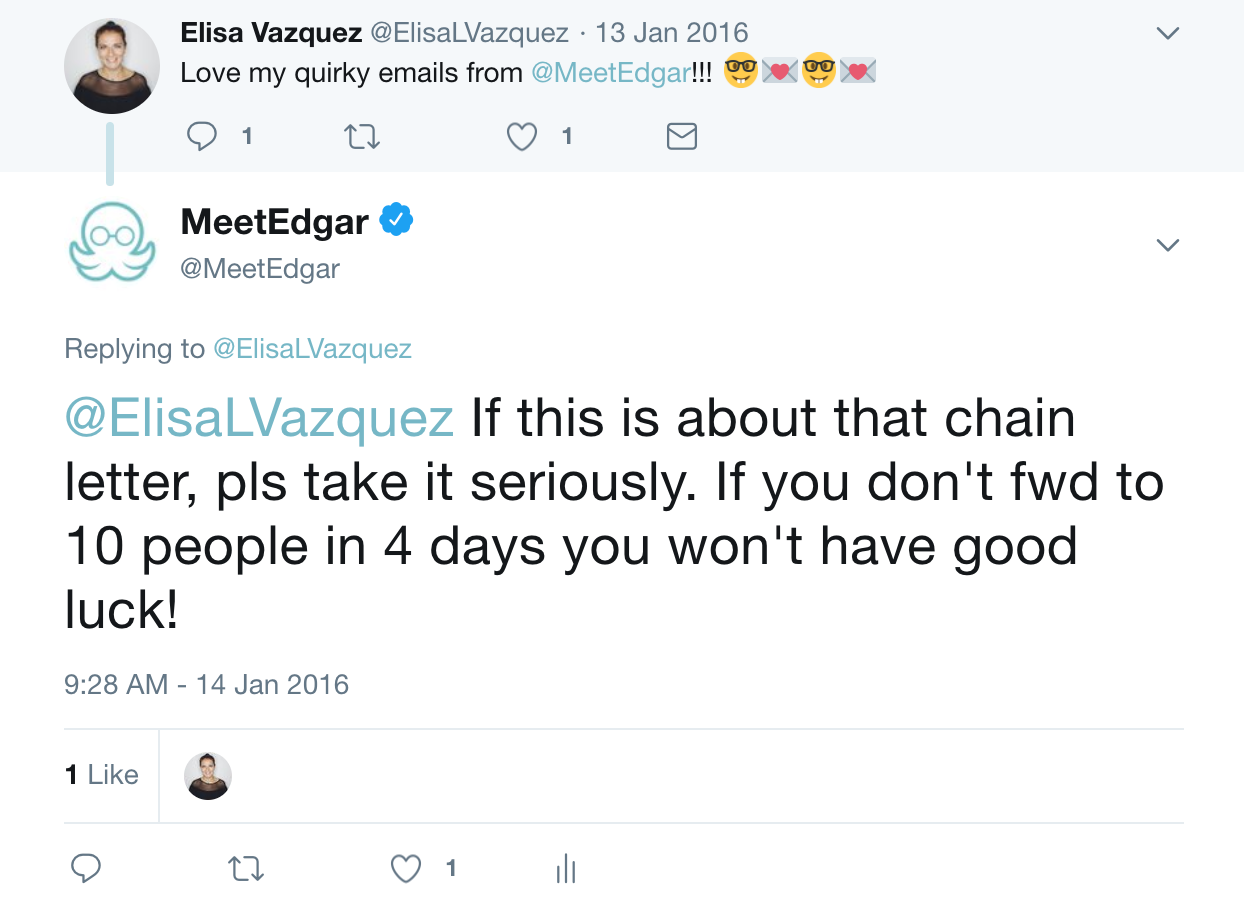 This also demonstrates the value of a social voice that aligns with your overall brand experience. Our tool, for example, was designed to be colorful, intuitive, and welcoming for its users – that sense of trustworthy playfulness is reflected in the way we express ourselves on social media, too.

If you’re not sure where to start with defining your brand’s voice, start by asking yourself questions – specifically, ones about both who you are and who you are not.

For example, here are a few bullet points from our internal brand guidelines describing the types of values we convey in our tone:

Compare those to these samples from those some guidelines describing attributes we are careful not to represent:

Look at other brands and ask yourself what values you see reflected in their voice, and whether or not you would want them reflected in your own.

Be as specific and concrete as possible as you do this. If your brand is funny, is it because it’s goofy and zany, or sharp-witted? If your brand is authoritative, does it convey that by speaking in the jargon of a particular audience, or by communicating complex concepts in a more common vernacular? If you’re sassy, who’s on the receiving end of your attitude – your audience? Your competitors? Yourself?

As you start asking yourself these questions, you should keep track of their answers in a living document – and that’s where your brand voice guidelines come in.

Maintaining consistency in your brand voice on social media

Maintaining consistency with your voice takes the same kind of deliberate effort as finding it in the first place, especially if you plan on delegating social media tasks like writing updates or responding to notifications.

For us, that’s meant creating the comprehensive set of brand voice guidelines that we mentioned earlier, which answers questions like:

Having these guidelines helps us ensure that no matter who is operating our Twitter account at any given time, they are able to keep our established voice consistent.

Using examples in your voice guidelines, whether they’re hypothetical or taken from your actual social media accounts, can also make adapting to your voice easier for newcomers. Walmart, for example, includes a variety of samples in their own brand guidelines demonstrating how certain personality traits manifest in their copy:

MailChimp has a similar approach, albeit one even more specifically tailored to social media. Their publicly available style guide includes details like how they use hashtags and emoji, how their content varies between social networks, and what abbreviations they do and do not use.

Your brand voice guidelines don’t have to be too long or complicated – even just a handful of adjectives and a few examples can be enough to give someone an idea of who you are!

And remember, your voice doesn’t have to be something that you decide on once and keep exactly the same forever. Brand voice evolves over time as your industry and your audience’s wants and needs change, and your guidelines should be a living document that evolves, too!

About the author: Tom VanBuren is the Content Manager for MeetEdgar, a social media scheduling tool for small businesses and entrepreneurs.